In my last post I talked about why I started and then stopped using Grunt. Basically, Grunt seemed too slow and my workflow was being halted too often while I waited for it to build. There are several other task running/app building tools out there (Broccoli, Cake, Jake…) but I decided to try Gulp first since it has a large user base and there are plenty of plugins out there to keep me from having to think too much.

At first, Gulp didn’t seem quite as straightforward as Grunt. Grunt was easy to use. You just had to write (sometimes lengthy) configuration objects for the plugins you wanted to run and then fire off the tasks using the command window. Even someone like me could figure out how to add a source file and a destination location to a minification plugin and be reasonably sure I would get a minified file out of it.

It was also very easy to visualize what your Gruntfile was doing because every task plugin worked independently of the rest. You would configure ten different tasks and then register them all together in a row and expect them to run one after another until they all completed.

With Gulp, you don’t just configure plugins, you write JavaScript code to define your tasks and how you want them run. A Gulp task asks you to require the plugins you want to use, or write a custom task using plain old JavaScript, then call Gulp.src to provide a source file for the tasks to run on. Doing this opens a Node stream which keeps your source object in memory. If you want to run one of the task plugins you required at the top of your script, you simply pass the in-memory object to it by calling the .pipe() method. You can continue piping the object from one task to another until you’re finished. Finally, you call Gulp.dest and provide a destination location.

The great thing about using Node streams is that you don’t have to keep opening and closing files for each task like in Grunt. This lack of i/o overhead makes running a series of tasks very fast. Even so, you really need to use the built-in watch task to take advantage of this speed. In my experience, running a default task with four or five tasks in it, from the command line, was almost as slow as in Grunt. With the watch task running, it only took milliseconds to rebuild what it needed to. But I’m new to Gulp so what do I know?

You can see in the code above that I used several plugins to manipulate the input file as it is piped down the stream. There are two that I found particularly helpful. The first is Gulp-Plumber which is basically a patch that keeps streams from being un-piped when an error is encountered. Supposedly, streams breaking on error will be fixed in version 4.0.

The second helpful plugin here is Gulp-Add-Src which does exactly what the title says. You can add additional source files to your stream so you can do neat things like concatenation. With these and other plugins I haven’t found anything with Gulp that would keep me from doing everything I could with Grunt.

The only thing I really don’t like about Gulp is the icon. It’s a cup with a straw in it and the word Gulp across its side. A cup by itself indicates an ability to gulp what is in it. But you don’t gulp through a straw, you sip or suck. Who wants their product to suck? And sip indicates a lack of passion. So what’s with the straw? 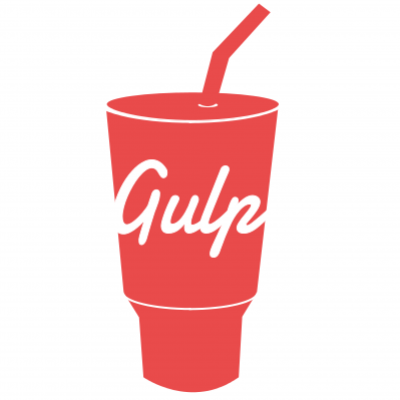